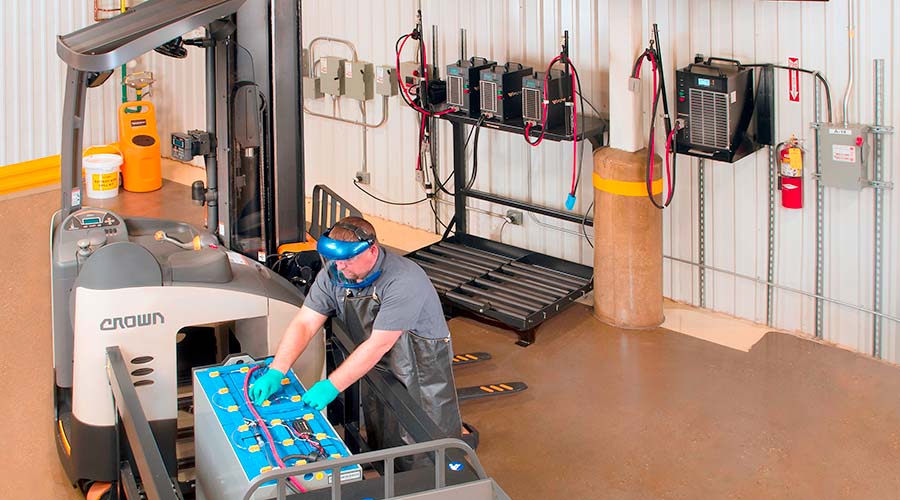 Regular maintenance of lead-acid forklift batteries helps preserve their capacity and could increase their life and run times. And this pays off in decreased downtime, increased productivity and less money spent on replacing batteries.

One of the most significant parts of lead-acid battery maintenance is monitoring water levels and adding water, as needed, to achieve improved performance.

But not just any water – like water straight from the tap – will do. Tap water contains dissolved minerals and salts, which can build up over time on battery plates, seriously shortening battery life and run times. Chlorine, added to some municipal water supplies to kill bacteria, can have the same ill effect on batteries.

Water that has been purified of dissolved minerals and salts through a process called deionization is recognized as the best choice for maintaining lead-acid batteries. Deionization eliminates more impurities from water than distillation or conventional filters.

With the mineral ions gone, deionized water will not conduct electricity and thus will not hinder battery performance. While some might argue that removing undesirable content from your water isn’t really creating a solution (mixture), it is definitely the right solution (answer) for getting the most from your lead-acid battery investment.

How to Water Batteries

How often you need to replenish water in a lead-acid battery depends on how often you use it. The battery of a forklift that runs all day, every day, may require a weekly watering, for instance. With use, the water evaporates, reducing the battery’s effectiveness and increasing the risk of battery damage.

So, it’s important to check water levels regularly after the battery is charged, keeping in mind that hot temperatures accelerate water loss.

Batteries should be watered while gassing or at the end of a charge cycle and should be filled to about a quarter inch below the bottom of the vent well.

To assure safety, make sure that only personnel who have been trained in lead-acid battery maintenance can water batteries.

Avoid watering batteries by hand. Hand watering is cited as the most common factor associated with improper battery watering. Instead, use a single-point watering system, such as Crown’s V-Force® Battery Watering System, which ensures that batteries are watered to the correct level.

Battery watering monitors, also available from Crown, feature LEDs that blink to indicate when the electrolyte level is good and go out when water is needed.

A single-point watering system reduces the risk of overwatering or underwatering, which can damage batteries. And the V-Force system reduces watering time by about 75%, compared to hand watering.

In labor savings alone, a battery watering system can pay for itself in less than a year. Proper watering, especially with deionized water, provides the added benefit of extending the life and improving the performance of lead-acid batteries.

For more information about battery watering, contact your Crown dealer.